The Passive Aggressive War Has Begun And Proverbial Fists Are Flyin'

March 19, 2010
It has begun.
The War To End All Wars.
Yeah. I went there.
Remember this?
Well, it was garbage day again yesterday. Notice the quality of the photo. It was done in the dark of night, as quietly as humanly possible. I was too afraid to go out onto the street to take the same shot as Em had done the week before, lest Her see me, come out and stab me in the eye with her wolverine claws. Hence, the rather poor photo quality. 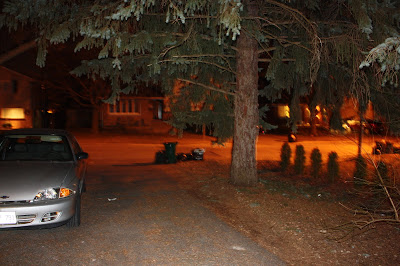 I have begun screwing with The Neighbours' minds, and it makes me happy to be alive. 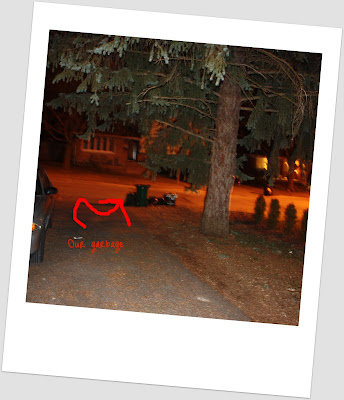 So, I told Dee to put the garbage on the OTHER side of our laneway Wednesday night. Yeah, the side that is still our side, but on HER side. Here, I'll show you again, from the other side of the street, in the daylight, so that you understand: 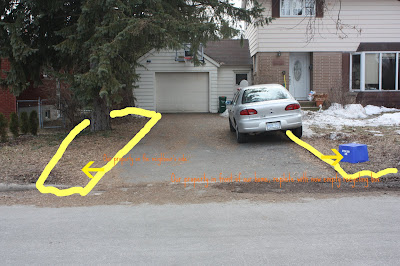 I did this for two reasons.
Reason Number 1: I was testing Her to see if she would once again move our bags over to the other side of the driveway.
Reason Number 2: I was making a point in a passive-aggressive way, which is how I roll, obviously. The point being, don't screw with me, girlfriend, because that scrap of land that looks like it's part of your lawn is actually OUR land.
By making this move, I was also telling Her that I knew all about her little game, I was onto her, and I wasn't gonna let her walk all over me and my garbage. Yeah, that's right.
Now you know not to toy with me, Her. Keep your distance with you and your wolverine claws, because what I have is MUCH more dangerous.
I have Wily Ways, not to mention children who will do as I tell them to when I bribe them, which obviously always comes in handy in situations like this.
Next: A noisy game of basketball at 1 a.m. Who's in?


P.P.S. I might be getting an award for saving a community school. Stay tuned!
Daily Ramblings Garbage Days Nei The Po Po of the Neighbourhood

Wander to the Wayside said…
I don't know what to think about you, Mary. On the one hand you're devious revengeful, and on the other you're a good community citizen? Bipolar? Jeckle/Hyde? Whichever, it makes for good reading! (I'm wondering what it's like to be one of your kids. How about you interview them and post it here someday.)

RHYTHM AND RHYME said…
I love your sense of fair play especially when you know your in the right. In our driveway we are allocated 2 parking spaces each,
which is paid within our rent , yet I keep getting people who are visiting other apartments park in one of my spaces. So I typed 2 notices put them in see through bags and pinned them onto the fence. Do people take any notice? NO. Sometimes my son has to park on the road at the back of the house, so I know what you're going through. Keep up the good work.
Loved the pics.

ReformingGeek said…
Your neighbors are crazy. Good riddance to them and their fascination with your trash.

Anonymous said…
Well, did [her] move the garbage again? I'm on the edge of my seat.

franzi said…
oooh, i like your thinking! give her trash bin hell!! ;-)

Tina said…
lol i like your fighting talk! good for you for standing up for yourself.

By way mate i have a new url domain name. My blog name is still the same. If you dont mind could you change my old url in your blogroll to this one instead:

Cornelius Butterfield said…
Think this is how the Civil War started, them putting their bucket of hog renderings on your side of the Mason-Dixon line, cus it's kinda stinking, then you push it back and he does it again and well. Pa, better git the shotgun!
March 21, 2010 at 2:04 AM

Maureen said…
HA! Good for you! I would have done the same.

Did she get the message??

And more importantly, are there more photos???

David J. M. Samson said…
I would love to not have any neighbours.

I would live in the country, in the middle of no where, but I am scared of the snakes and beasties.

Human neighbours might be the best choice I have at the moment.