March 29, 2010
Whoever came up with Earth Hour needs to be blamed for the chaos. And all the deaths, not to mention the rabid chipmunks wandering the streets blindly at 9 p.m. Saturday night. Well, I didn't actually see them, but I know they were out there. I could hear their chatter clearly.
There is something a bit frightening and disconcerting about a neighbourhood that is suddenly silent and dark, when normally windows are lit up, televisions are on, and lives are lived. It's almost like Armageddon has silently passed through, killing everyone in its path. We were living The Road , a book I  recently finished reading, and we were about to get chopped into tiny little bits by cannibalistic people who looked dead but were actually alive, sort of like zombies, but the opposite. I'll call them Anti-Zombies. This was actually going through my mind as I looked out the window, trying to find some light, any light, on our street.
If there's one thing I've noticed about Dee recently, it's that he is becoming very world-aware.So I blame him for all of this insanity. Because otherwise, we would have ignored it entirely, and gone on with our merry Saturday evening lives of watching Saturday Night At The Poker Salon, playing Wii NHL Hockey, and hitting each other with pieces of furniture and raw pork tenderloin.
But no, Dee had to put his oar in and get all in our faces about how we had to abide by the "Earth Hour rules" and turn off all energy-guzzling amenities INCLUDING THE TELEVISION AND PVR AND LAPTOP!! because if we didn't, the world would blow up and die in ten years and then where would be?!
Dead, I said. Obviously.
So, Mr. Handsome then said it was all just a ridiculous ploy for the government to seem like it really cared and was actually doing something worthwhile and meaningful for the people, and then he pointed out to Dee that if he just turned the damn light off in his room when he left, more energy would actually be saved than by turning off every damn electrical appliance for only an hour once a year. Touche, Mr. Handsome.
To which I assumed meant that the government was in on the whole Anti-Zombie movement that was afoot. Not that I didn't expect it.
Dee shrugged, and then proceeded to turn off all the lights and the television. Then he came over to me and started unplugging my laptop, and I began to scream and flail my arms and legs and blood started spewing from every orifice in my body. So he left me alone.
After a few minutes, Dee decided an hour of total silence and darkness was a really really long time, so he decided that perhaps having "just the television and the Wii on" would be acceptable. But nothing else, he added, looking over at me with evil in his eyes.
Hence, what is known as Earth Hour elsewhere in this world is apparently known at our home as Earth Ten Minutes. Because that is all we can clearly handle without killing each other with rolling pins, Wii-motes and just about anything else that is not nailed down to the floor (which would leave just about ... everything).
Yes, this family is all going to go to hell because we cannot live without power for an hour a year.
Dee then decided that having only the television and the Wii on would be acceptable in terms of Earth Ten Minutes, so he and Mr. Handsome proceeded to play a raucous game of hockey while I read blogs. The rest of the house remained semi-dark for another five minutes or so, until I realized I was starving, so I had to turn on every light on my way to the kitchen so that I didn't fall over a chair or dog bowl, or a person. Also, so that I could find that last piece of Limburger cheese in the fridge. 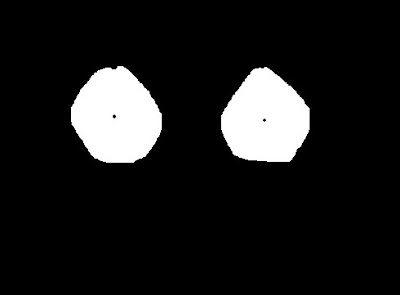 Yes, actually, my eyeballs really do look like this in the dark.
As I was making my way back into the living area, I happened to look over at the guinea pigs, Furry and Mo. They live in a big, homemade cage in a corner of our dining room, and they're very cute.
Meet Furry and Mo: 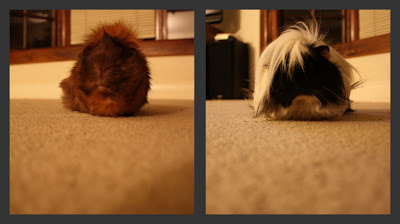 Furry is on the left, Mo on the right. Furry is six years old, which is quite old for a guinea pig. We adopted Mo after Cuddles passed away about a year ago. Mo is a wannabe rebel, Furry is her leader.
I could barely see the pigs because of the lack of light. As I waited for my eyes to become accustomed to the dimness, I noticed that something wasn't quite right in PigLand. So, in order to ensure safety in the home and for my family, I stepped up a little closer to get a better look.
And this is what I saw: 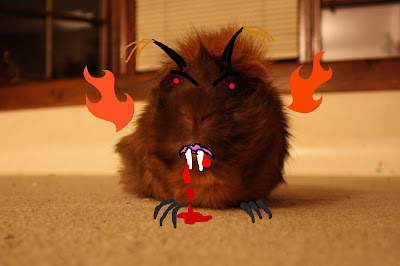 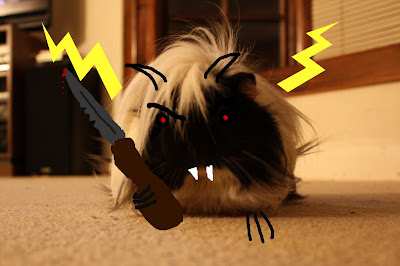 Be afraid. Be very afraid. Evil abounds, clearly.
That's right! The pigs had joined forces with the anti-zombie chipmunks outdoors and were in the midst of surreptitiously invading our bodies, ready to pounce on our necks at any moment and rip us to tiny little shreds of human matter entirely for their consumption.
Alive, and yet, somehow not, the guinea pigs were no longer herbivores, but were now obviously carnivores, murderers of the worst sort, apt to do whatever it took to get a chunk of human flesh in their jaws. They're nasty at the best of times, so getting any closer to them was just asking for it. I was going to get Dee to deal with them, but at the last second, decided he was a bit too young to go near the knife Mo held.
It was the strangest thing, but once I turned on the dining room light, and took the sharp knife away from Mo, they seemed to calm down and go back to eating their hay and pellets. I didn't bother mentioning it to Mr. Handsome or Dee because I didn't want to frighten them, especially Mr. Handsome. He doesn't do well with blood.
Obviously, I'm going to have to keep a closer eye on those two. And keep lights on at all times.
Anti-Zombies Cormac McCarthy Daily Ramblings Earth Hour Furry Mo Mr. Handsome The Road Zombies

Wander to the Wayside said…
You missed a golden opportunity here, Mary. If you had told hubby about Furry and Mo, he might have thought that you had sustained a head injury while walking in the dark and called the PARAMEDICS. And we all know how you feel about them! Well, maybe next time...
March 29, 2010 at 8:20 AM

Claire said…
"hitting each other with pieces of furniture and raw pork tenderloin." You guys do that too!? Excellent.
March 29, 2010 at 8:56 AM

RHYTHM AND RHYME said…
I thought you were brave to keep all electricity off for as long as you did. I'd be lost without my laptop, tv I can do without but lights of some kind no, I live in a spooky house and every creek and groan I hear so to go an hour would be a nightmare.

Cockroaches, mosquitoes and guinea pigs will be left after humans die out. Maybe they'll be smart enough to turn out the lights ;-)

Anonymous said…
I think that Mr Handsome should do like I do and levy a $2.00 fine for every light left on when the child isn't in there. I damn near made the house payment the first month I started that!
March 29, 2010 at 10:24 AM

Anonymous said…
I went out to a Tapas Bar and completely forgot it was Earth Hour. I am sure mine was the only house on the street that left the lights on And I did so because I don't like leaving my little nervous wreck of a dog home alone in the dark. he likes to watch tv... Animal planet, even though it scares him, and I leave the light on in my bedroom and one light in the living room if he comes downstairs.
So... there you go. I've confessed and didn't save any one a penny.
Terri
March 30, 2010 at 12:26 AM

Lana@The Kids Did WHAT?! said…
Holy crap! That's what our hamster does when the light go out too!! I'm happy it's not just me that witnesses rodent terror.
April 8, 2010 at 1:27 PM