Scoop on the Poop

March 05, 2010
So, this is the plan.
As you read this, I will be traipsing through my lovely neighbour's house. In disguise of course. 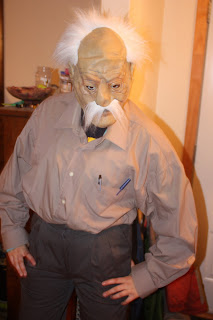 This just may be the best day of my entire life, including the birth days of both my children, the day I met Mr. Handsome, and the day my left nipple hair finally decided NOT to grow back.
It's a huge deal, and I cannot divulge all the top secret information, but let's just say I know someone who knows someone who used to do know someone who knows this person who is a realtor and is going to take me through the house. Because she is as nosy as I am. The disguise is in place because I am a neighbour, and used to be a realtor, and a lot of people know me in the neighbourhood, and it would really cramp my style if someone told these assholes neighbours that I went through their home, pretending to be an interested buyer. Although, now that I think of it, it could also be all sorts of awesome.
UPDATE: We went through the house. No poops disposed of into a dresser drawer, I'm sorry to say. There were just too many damn people around. I had it all wrapped up in newspaper and Saran wrap, ready and waiting, but the opportunity just did not present itself. At one point, I even thought I could quickly throw it into a furnace duct, which would have been just awesome, but nay, I was not alone long enough even for such a quick move as that.
And what's worse, guys, is that apparently they have 19 showings today, and already have one of what is sure to be many offers on the table.
However, looking on the bright side (because that's what I'm always about), I now know these neighbours are moving far far far away from us, to the country, where they will be so very alone, and will be able to be as anal and ornery as they want to be. And I will never again have to see HER mousy little face all scrunched up as she looks my way EVER EVER AGAIN!
Can I hear an amen?!
Excuse me now while I get rid of the plastic-wrapped dog crap that I forgot about and is still sitting in my coat pocket...
UPDATE x 2: I am now thinking that perhaps I should now just focus on possibly making my neighbours' lives really miserable for the time they have left living beside us. I have an endless number of ideas up my sleeve, such as: playing Air Supply really loud at midnight with the windows open; running through the front yard naked with the dog; buying a couple of rusted cars, some old wood, and bedsprings and kind of just leaving them out and about on our property, right next to our Christmas tree, which happens to still be out by our laneway, because Mr. Handsome forgot to put it out when the city was picking them up and now we have to live with a very brown, dried out pine tree lying on its side in our front yard until next Christmas.

ReformingGeek said…
Yes, please do all that you mentioned and enjoy the moment.

Be sure to have a neighborhood party celebrating their successful showings. Ahem. Forgot to invite them, of course.
March 5, 2010 at 11:52 AM

Anonymous said…
May I suggest the following?
pink flamingos on the front lawn... or snow... with a sign saying... we'll miss you.

or how about leaving your recycle bins on the drive way along with any and assorted garbage bins. ( my neighbour always asks me - "is that your recycle bin on the lane way?" roll eyes

I do like the idea of leaving a bunch of lumber, a couple of cars, and whatever piling up. I have some left over basement construction material lying around that I would be happy to lend to the cause. f

Wander to the Wayside said…
But what did her house look like? Did you like the arrangement, the decor, the colors? Did you look out all the front windows to see exactly what your house looks like from her house (because the new neighbors will also have the same view, you know). And while you'll be tryng to make their last months there asthetically displeasing, just remember that any prospective buyers will see it, too!

Scribe said…
You're a woman after my own heart. After my neighbours called the cops on a small house party I was having (at 10 p.m.!), I left some random crap in their mailbox and on their lawn. Oh, and I blasted Achy Breaky Heart for two weeks straight. I don't know who was more traumatized, me or the Po-Po Girl.
March 5, 2010 at 3:08 PM

RHYTHM AND RHYME said…
I think Mary you and I have alot in common, Someone is moving in the appartment above me and she had squirrel traps put around the garden, now I enjoy watching the squirrels at play in the trees so
I have gone out and bought ornamental squirrels and put outside my door which she has to pass to get to her door.
Your post made me hoot with laughter, with you in disguise.
Please keep us informed of developments.

Anonymous said…
The Air Supply playing at all should have them out of there within the hour!
March 6, 2010 at 10:25 AM

Lana@The Kids Did WHAT?! said…
I personally think it would be fun to KILL your neighbours...with kindness that is!! Slap on a disgustingly sweet (yet fake!) smile and bring them baked goods, fowers, half eaten mouse cadavers (whatever suites your fancy I suppose) daily.