It's About Damn Time. You're Right, And I'm Sorry. Now Do You Feel Better? Didn't Think So.

May 18, 2010
Monday.
Mondays are hard enough. Couple that with Monday after close to a month travelling from one end of the world to another, and I don't think I have to tell you how freaking confused I am. And I was pretty confused to begin with.
So, I'm back. And it's time to once again face reality, drink the Kool-Aid, and go through the motions of my daily life. Which is difficult on the best of days, but so much more so when you consider that I've been living in a lala land for the past few weeks, eating in restaurants every day, watching Italian men, trying to touch New York policemen's bums, and not thinking too much about real life.
Suffice it to say that I've had a blast. The trip to Geneva and Venice was amazing, replete with heavenly visions of canals and centuries-old buildings (and beautiful Italian men), totally engrossing us in an historical world of many yesterdays ago. I felt like I was in a book or a movie. One evening, as Mr. Handsome and I strolled through cobbled, narrow, very dark streets, I told him I found it almost impossible to believe this was real. It felt more like a movie set, or a ride at Disney World. That is how unreal it was.
It was so unreal that I found myself holding my breath repeatedly, forgetting to breathe as my eyes took in all the unbelievable beauty, the history, the amazing vibrance of a city so old that it is literally falling apart and sinking. Scaffolding has risen up throughout Venice, in a possibly feeble attempt to keep the city upright. 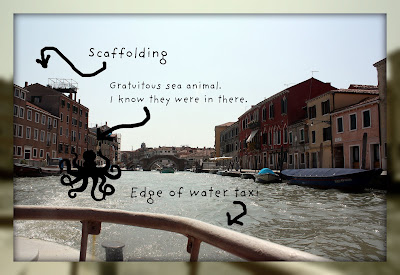 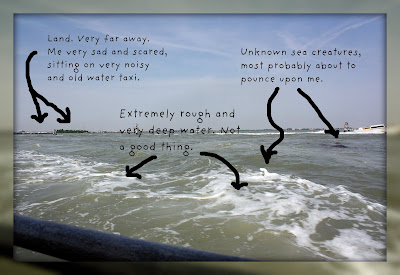 Don't forget to click on the photo to get a larger image,  if you really and truly want to read what I've written. I wouldn't bother either. 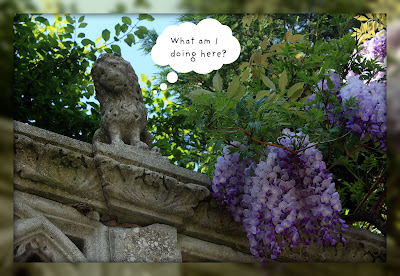 Sad-looking lion sitting next to gorgeous wisteria blossoms. My artsy shot.
Although we didn't ride in a gondola (even I realize that paying $150 for a half-hour ride in a wooden boat is waaaay too much), we did take water taxis (the extremely noisy version of a gondola), walked through hundreds of streets and squares, ate at many waterside cafes and restaurants, and breathed in all that is Venice. 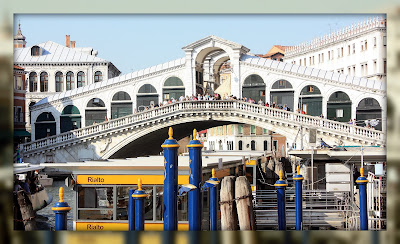 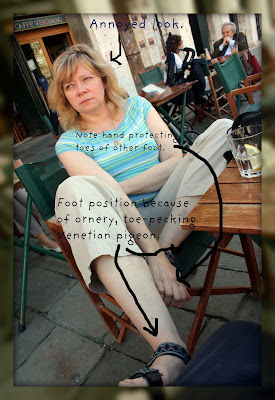 One of the most romantic cities in the world, Mr. Handsome and I took advantage of this fact and spent one evening on Piazza San Marco, sitting at a table, drinking special drinks, eating an amazing dessert, and listening to classical musicians play beautiful music. It felt like a dream, and I didn't want to wake up. Completely magical. 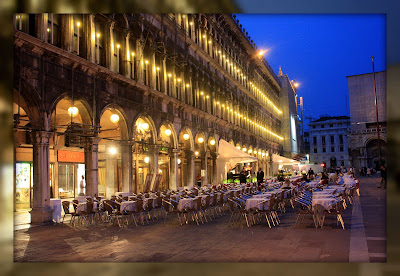 The Piazza San Marco in the evening. Pure beauty. 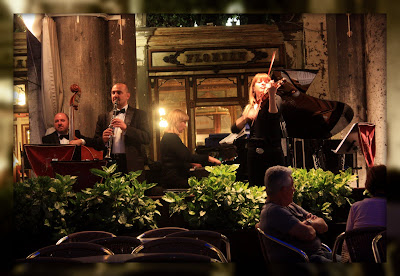 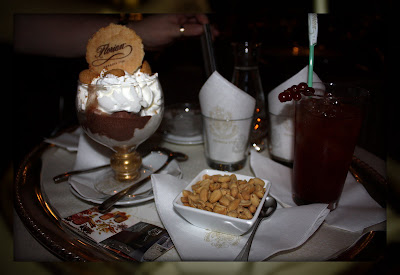 Our dessert and my drink: vodka and cranberry. It was ALMOST too beautiful to drink. The peanuts were gratuitous.
But wake up we did, and too soon, it was time to go home.
The trip home from Venice was uneventful, unless you include the huge bang and flash of light as our plane rose into the skies. I was sure we were going to die. And I was also sure it was the work of that suspicious-looking guy I'd seen in the airport gate area and had automatically pegged as a terrorist because he just looked sneaky.
The big bang, flash of light and airplane bounce ended up being something the pilot called "a static disruption", although those weren't the words he used. Sorry I can't think of them. I'm still in shock. Apparently, this kind of thing happens quite commonly on flights, and it can sometimes cause plane damage and cause the plane to turn around and land. The pilot told us everything "seemed to be fine", the instruments "seemed to be in good working order", and he said he had decided we would continue our OVERSEAS flight (as in, flying over lots and lots of very deep water), and he'd have the plane examined thoroughly when we arrived home.
Good decision, alert and overly informative pilot. You only made me sweat buckets for 9 hours straight, and bang my head repeatedly against the back of my seat as I convinced myself that I was about to die and would never ever see my children again.
I then had three days in which to recover from jet lag before I yet again left for five days in the Big Apple, this time on a bus. I wasn't sure what to expect on a bus tour, since the last time I'd done one was when I was 16 years old and took a trip with my dad and younger brother across Canada and the United States as part of a bus tour filled with people who I was sure were taken from their graves just to fill the seats.
Stay tuned for details on The Bus Tour In Which Mary Fills The Bus With Five Days Worth of Gaseous Emissions.
P.S. This post was supposed to go out yesterday, but I had lots to do, and the internet wasn't co-operating, so just put the word "Tuesday" in wherever you see "Monday", unless it doesn't make sense, in which case, put "Monday" back in and forget I said anything.
Daily Ramblings New York City Photos Sluts Are Nice People Too Taking a Bite Out of The Big Apple Venice Italian Style

ReformingGeek said…
Pecking pigeons? Is that anything like Peter and his pickled peppers?

RHYTHM AND RHYME said…
A great account of your trip abroad and the photo's were great..even the one with you and your aching feet..lol.
I see you haven't forgotten your sense of humour,thank God.

Simply Mags said…
It looks sooooo beautiful there....looking forward to hearing about your NYC adventures....did you take many pictures of the po po's butts?
May 18, 2010 at 9:41 AM

Liz Mays said…
Welcome home!!! It looks extraordinarily beautiful there! You're so lucky! Sorry about the toe pecking.
May 18, 2010 at 3:02 PM

Anonymous said…
I was wondering where the hey you've been. Glad to know you got some blog fodder out of it anyway. THAT, of course, is the most important thing. ;)
May 19, 2010 at 2:37 PM