I was a beautiful ninja, but only in my mind

April 14, 2010
I was a ninja yesterday.
I had to go down to City Hall to renew Dee's health insurance card, but instead of City Hall, I ended up going to the provincial courthouse, which could have been disastrous, seeing as they have courts of law there, and maybe even a jail cell or two.
Instead, what happened was brilliant (say that last word with an English accent and with vigour).Because as I walked into the courthouse, I realized almost immediately that I was in the wrong place. Actually, that's a complete and utter lie. I had no idea where I was. All I knew was that the place was buzzing with the po po, and I was as happy as a sandboy (what the hell does that even mean?!).
The lady at the counter told me I was in the wrong place, and I couldn't stop staring at her because her eyes freaked me out. It was difficult looking at her because I was never sure which eye I should be looking at. Ever had that experience? It sort of feels like you've had a few too many vodkas and cranberries, so things are pleasantly spinning, but not enough so that you're prostrate on the marble floor puking your god-lovin' guts out. Oh,. Just me, eh? 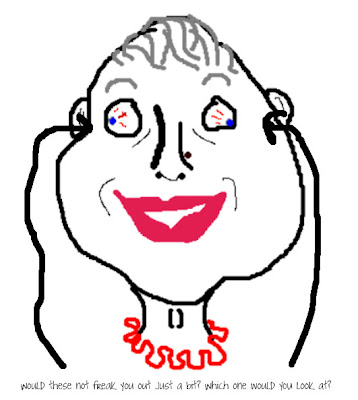 Great. And now, all the people who actually know me are going to be calling me, forgetting that this blog is often full of lies, sarcasm and exaggeration, and they'll be all worried about me, and probably set up a secret intervention, and then I'll feel really guilty that they put all this effort into thinking about me, so I'll say, "Yes, I'll go to the Northwest Territories and attend three months of addiction counselling. Gee, thanks for thinking of me," and everyone will cry, and then I'll miss my trips to Swissland, Venice and New York City and just be really cold for three months of darkness..
And now my laptop is freaking out, like it's on to me or something, and everytime I hit the "Enter" key, my cursor up and disappears on me, and I have to spend three minutes finding it again before I can continue with my scintillating story.
Where was I?
Oh yeah, the lady with the spooky eyeballs.
She was very polite, though, so I'll forgive her for her physical disability. You're very welcome, strange older lady with buggy eyes that frightened me and made me want to curl up on one of the chairs in the fetal position and suck my thumb while moaning softly.
She told me I was in the wrong building. And when she told me that, she didn't smirk, chortle or even snort. She just said it, plain and simple. I then made her repeat the directions twice because I needed to look at those eyes a bit longer to try and figure out whether she was a person, or perhaps one of those zombie robots I've been warned about.
Fortunately for me, the correct building was just outside the building I was standing in, and around the corner. I just had to go down some stairs, across a hall, out the doors, and over to the building, which is actually the City Hall, the building I was supposed to go to in the first place.
So, after surreptitiously taking a picture of Zombie Robot with my cellphone camera, I made my way down the stairs. And that's when I became a ninja. Because guys, there were cops. In uniform. Everywhere. Oh.My.God. I gave a fleeting thought to having a fainting spell just so I could be like a damsel  in distress, but I had left the dog in the car. Bad choice on my part.
So, what I did instead was become very nimble. I literally jumped down to the floor the third step from the bottom, and skipped across the big hallway, in front of two officers who were obviously very alert. I'm also so glad I wore attractive clothing (a ripped hoodie and dirty jeans) and no make-up. Also, my hair needed a wash. Awesome.
As I neared the doors to the outside, I noticed another set of stairs in front of me. So, instead of slowly ambling up them like the aged idiot that I so obviously am, I ran up them, skipping steps in-between. Yes, yes I did.
And then, I pushed at the door to go out, and smashed right into the glass.
There was a loud noise.
There were looks of confusion.
There was much embarrassment.
And so, I then pulled on the door handle, opened the damn door, and skulked off to City Hall.
I can't be sure, but I bet the po po are still talking about me.
P.S. I'm not sure, but I think that perhaps I wasn't a ninja after all, so this whole post was sort of a lie and quite possibly pointless. Can you be a ninja if only the lower half of your body is moving fluidly? I didn't have knives or any motives, so does that mean I actually only made a complete fool of myself, and nothing else? Yes, it probably does.
City Hall Daily Ramblings Ninjas The Po Po This Is All A Lie

Anonymous said…
Ok, I had to go back and read your other po po stories because I wasn't sure why the po po elicited this "possibly like a ninja but only the top half of a ninja" like reaction in you. I mean, are you wanted? Do you have a phobia? An obsession? What? I'm still not sure I get it, but when I read the post about getting caught redhanded running a red light and getting away with it, I did come to the conclusion that the po po are friends to you is some group think cosmic way. Brilliant, Mate. Good on ye.
April 14, 2010 at 9:57 AM

RHYTHM AND RHYME said…
If ever I need cheering up I come to your blog, I can be sure I come away in fits of laughter, even when you write serious issues they have a hint of humour.
This post is no exception.
Take care.
Yvonne,
April 14, 2010 at 2:47 PM

I Could Live The Kobe Life, But I Don't Like Beer

July 20, 2009
Today's lesson is about Kobe. You know Kobe the Japanese cow ? Yeah, that one. I had the pleasure of meeting Kobe Saturday night when Mr. Handsome and I took advantage of the fact that Em and Dee are still at camp and we are spawnless, so we went out for an actual nice dinner at a place called Milestones . This was a first for us at this eclectic restaurant, a place I've wanted to try for a couple of years now, but have never gotten around to because there are more important things that keep coming up, like laundry and grocery shopping, and washing hair. Anyway, Mr. Handsome left it totally up to me to choose a place, which was stressful because I don't do well with choices. Ask me to choose which crayon to use, and I have to take an extra Xanax. I started out choosing a Japanese restaurant, but Mr. Handsome made one of his faces at me, which told me he wasn't happy about it but would go and pretend to enjoy it for me, so that one went out the window pret
Read more