February 08, 2010
We decided to have a nice family night on the weekend, and ended up watching Deliverance.
What? We played Hearts afterwards, so it's all good.
Mr. Handsome (who is apparently reading my blog again -- read it and weep, buddy) said the movie was entirely inappropriate, and he walked around all serious-like and feigned authoritative license, and then said dinner was ready and we were to shut off the television.

I let him know, in no uncertain terms, that the stuff he has allowed the kids to watch (including all those video games that do nothing but glorify violence, blood and gore) is so much worse than anything on Deliverance. Oh, and we won't even go into watching Die Hard on Christmas Eve, and stating that it's a perfectly fine movie to watch on Christmas Eve because -- hello! -- it takes place at Christmas time. Or, how about WWF Smack Down wrestling matches? Or those caged wrestling matches you and Dee seem to adore? Yeah, let's talk about that for a moment, shall we, Mr. Handsome? Yeah, didn't think so. 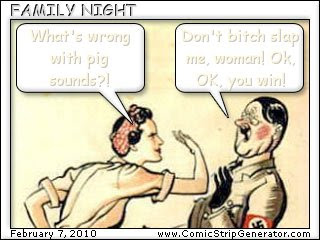 But no, Mr. Handsome could not accept my logic as enough reason to leave good enough alone. Oh no, guys, he had to go so far as to ban the children from watching what is one of my favourite movies ever. Because, really, think about it. Who thinks wild hillbillies are going to come out of the woodwork in the middle of the forest and shout, "Soooey!! Sooooooeeey!", which actually, now that I think of it, could be kind of fun. This film is pure awesomeness just because of its total unexpected creepiness. And, because Burt Reynolds looks really hot. He pretty much went downhill from there, which was 1972, so he's been going downhill for a loooooong time.
I even told Mr. Handsome that the part that he was most worried about (you know, the "soooeeey!" part where Ned Beatty gets done up the cadbury's) isn't even shown in the movie because it's censored (duh!!), but that didn't deter Mr. Handsome. Oh no. He just had to see for himself, he did. So, he proceeded to go through the film and fast-forward through the bit where Ned is rolling around in the leaves and mud with the hillbilly running around him, and they're both screaming like tiny piglets (which, actually, I think is kind of cute).
So, that part he would not allow the children to see (it actually was completely edited out of the tv version anyway). But the part where the hillbilly (is it even PC to call these people hillbillies?) gets shot through the chest with an arrow, or the part where Burt Reynolds' leg bone violently comes out through his skin and there's blood and skin flapping in the breeze. Or, how about a couple of hours of brutal boxing, where the guy's bleeding profusely out of both ears and half his nose is shifted over to where his left shoulder should be? No, that's fine, according to Mr. Handsome.
I guess we did our children a great disservice, then, by allowing them to watch Charlotte's Web and Chicken Run and Dumbo, because yo, the animals are all over the place in these movies. How disgusting and inappropriate. Our children are scarred for life.
I would just like to see Mr. Handsome take on the career of a film censor in his next life. Yes, all violent scenes and disgusting bits of blood, guns, swear words and complete and utter nastiness are all totally fine, but we have to cut out that bit with the two people playing farm animals. Because pigs are very, very dirty.
Daily Ramblings Deliverance Family Guys Are Stupid Pigs Are Clean Stupid People

RHYTHM AND RHYME said…
The film Deloverence was a favourite of my late husband and myself.Eespecially the music,personally I can't see anything wrong in the film.

Well it's the start of another week perhaps this one will be better.

Anonymous said…
I only saw Deliverance once I think all the way through and that was in the theater when it came out. [Yes, I'm dating myself] No, I didn't date myself; I didn't take a date to it either. I went with some friends.

I'm not sure that I understood it all. I wish it would come on cable sometime so I could watch it again and pay attention to what I did not understand.

I do understand the the soooeeee part was actually Ned Beatty's add lib that was added in.

I'm going on about the movie because I don't even want to attempt a comment on Mr. H. That would be a good way to get in trouble and I need to avoid trouble for a while.

WarsawMommy said…
OK, I must confess: I have never seen it (don't shoot!) and I really didn't ever want to. Until now. Since reading this post, I think it is required viewing!
February 8, 2010 at 8:45 AM

Michele R said…
I am going to run this past my Hubs and see what he thinks. hey, we do live in GA and have wanted to go river rafting.
I bet you and I could play a game where we list what "questionable" movies our kids have seen with us. Hubs started them early with Gladiator (great movie and educational). He also watches Blade with them.
Over the weekend we watched The Hurt Locker.
Very funny post--loved it!
February 8, 2010 at 11:21 AM

ShanaM said…
At least the two of you talk about stuff!!

ReformingGeek said…
I'm feeling queasy from reading this post so I don't need to see the movie.

franzi said…
you know what's on tv during christmas in germany? die hard 1-4 (yes, all of them and it starts around 10pm on dec 24th). for me, these movies are a must around christmas time so i absolutely understand your hubby-who-happens-to-read-the-blog-again.
February 8, 2010 at 3:35 PM