Llamas and Alpacas, Oh My!

June 14, 2009
Ottawa is known for being the capital of Canada, for having some of the most beautiful scenery, for having a farm smack dab in the middle of the city, and for being the place of birth of the Beavertail.

It also has llama and alpaca farms. 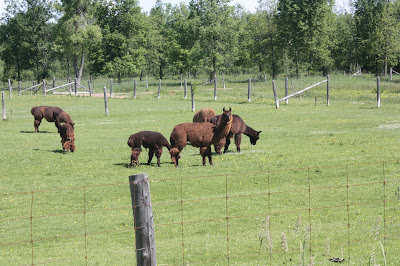 This alpaca is not a nice alpaca. Notice the stare. He is staring us down as we near the fence. I am not imagining this.

I suppose, if you want to get technical, I'd have to say the farm we saw wasn't in Ottawa proper. More like on the outskirts, in a little village called Osgoode, about half an hour from Ottawa. Which, for we Ottawans, is still Ottawa, because we're self-centred like that. 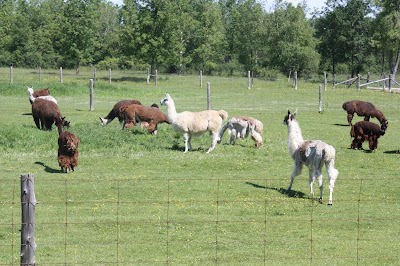 Dee and I happened upon this farm as we went on a Sunday morning road trip. We just up and went, early Sunday, without a destination in mind. I just wanted to get out. It was a beautiful day, Dee was needing some one-on-one attention, and that's how it happened. Within half an hour, after Dee packed up some cold salads and iced tea, we were on our way. 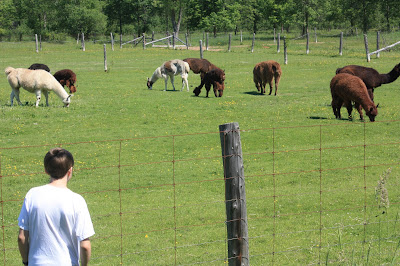 Dee was a brave, brave boy. Unlike his momma, who stayed on the OTHER side of the ditch.
Going down one road and up another, I made Dee give directions. "Go left here. Now turn right."
At one point, he asked me where we were, and I had to tell him I had no idea. Which didn't mean we were lost, because I could always find my way back home (eventually), but to Dee, it was a bit scary. And that made me laugh, because if there's one thing I love doing, it's scaring my kids. You should see what I do in the dark! Just kidding ...

And then, we saw the llamas. And all Dee's fear disappeared, and excitement replaced it. "Can we get up closer?" he asked.

So, of course we did, leaving the car on the side of the road and making our way across to get a closer look. Dee decided to cross the wet ditch to get an even closer look.

Llamas and alpacas are strange and wonderful things. First of all, they stare you down, which made me rather uncomfortable. A few other interesting tidbits about llamas and alpacas: they are very clean animals, poop in the same small area, are very hardy and require minimal shelter. But the best part? They hum. Not show tunes, but little humming noises, as if they're just happy to be alive, walking in their little paddock, eating grasses and things, waiting to be sheared. You can't get much cuter than that, I dare say.

At one point, Dee wanted to stick his hand through the fence and feed them some grass, and I screamed, "NO!!!!" as if he was about to get swallowed up by a lioness with her young instead of a furry and peaceful, grass-loving mammal.

These animals are quite large, but they're also amazingly cute and furry. If only they were the size of a small cat, I wouldn't find them so scary. Because, despite their outward appearance of innocence, I know what lies underneath. Remember, I have two children. Appearances deceive.

Anyway, after our llama and alpaca experience, we ventured forth in our Accord, looking forward to our next adventure. And then Dee let me know his stomach was "guffling", which I think means he was getting hungry. Of course, he hadn't had breakfast, and that's after telling hm about 1,342 times to have breakfast before we left. Kids.

After consoling him and assuring him he would not starve and turn into a skeleton before we stopped to eat, I started looking for a place to stop. Dee kept pointing to farm fields and rough patches of ground, exclaiming, "Hey!! That looks like a great place to stop and eat! Look, we could put the blanket out there!"

And I would keep driving, nodding in the affirmative, meanwhile thinking, 'This child needs therapy.' 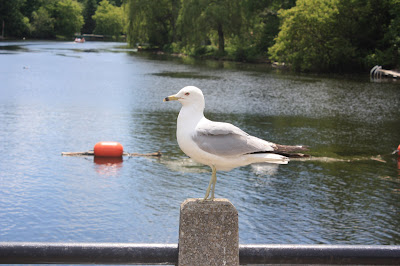 We took a few turns here and there, and somehow ended up at a lovely old mill in the small village of Manotick. And after being told by the mill-person-who-sells-the-breadcrumbs-at-the-mill-which-no-longer-actually-makes-the-bread that there was no washroom on the premises, I decided I'd 'hold it', and we went off to find a spot to sit down. Which was not hard to do, seeing as anywhere you looked, there was nothing but beauty. Situated on the Rideau River, which runs through Ottawa as well, this village has it all. I need to come out there more often. 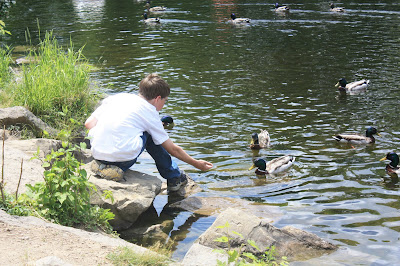 Dee and I found a great little spot right by the river's edge, by the locks at the mill. Lucky for us, a number of duck families had also found this spot, and so we sat there, and ate, and Dee spent a good part of the time feeding the ducks. A couple were even courageous enough to actually eat the crumbs out of his hand, which pleased Dee to no end. 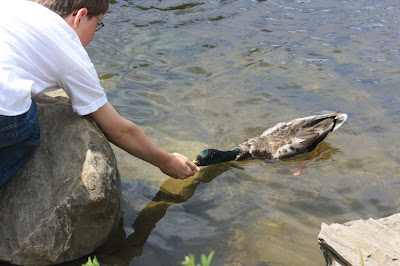 This was one of the few brave ducks of the lot. He ended up eating out of Dee's hand.

We ended up getting back home an hour-and-some later than I had planned, and I promptly had to lie down for a wee nap. I was exhausted. Driving around country roads and listening to the Grease soundtrack for three hours straight will do that to you. 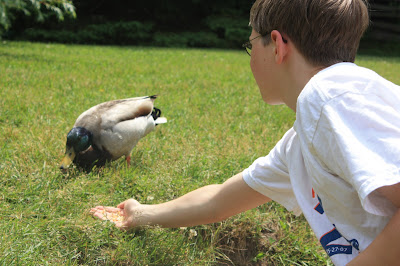 The land duck, also a brave duck, who ventured forth into the Great Unknown of the Human.

But it was all worth it for Dee's face of happiness as we went home, and his exclamation that, "Mommy, this was the best day ever! Thank you." 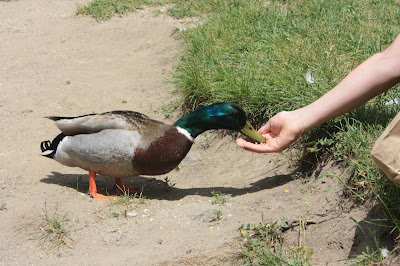 You're so welcome, sweetie.

roy/elisabeth dean said…
awwwww....I love days like that!
We took Joe Cocker to a park here in town to visit the ducks. We go there frequently to feed them and just sit in peace. Not so with Joe Cocker Spaniel! He chased ducks to the water and THROUGH the water! Poor things.

Stephanie said…
That is the sweetest story! What a great idea to just pack some food and head out with no particular destination in mind. Can't wait for my kids to get a wee bit older so that they might actually be in to that!
Wonderful post.
June 16, 2009 at 10:19 AM

ReformingGeek said…
Nice! That sounds like a fun day.

Elisa @ Globetrotting in Heels said…
wow, those ducks were friendly! and hungry! they usually swim away and stay at a safe distance, staring at you until you throw the food in the water. But to be fair, that's Swiss ducks. Maybe Canadian ducks are just frendlier ;-)
June 16, 2009 at 10:47 AM

Home exchange said…
These photos are brilliant brilliant! I can never take decent photos of animals. These are so cute! Well done :-)
June 16, 2009 at 11:28 AM

ChurchPunkMom said…
Llamas and alpacas are crazy awesome.
We have family in Tennessee that have an alpaca farm.. they are SO fun.
June 16, 2009 at 12:33 PM

RHYTHM AND RHYME said…
Hi, a most informative blog and the pictures are awesome. I do love wildlife and this was so interesting to read.

aussiechic said…
Didn't their eyes amaze you??? They have the biggest softess eyes and they have the longest eyelashes - I mean just amazing.....they are truly beautiful.....
June 16, 2009 at 9:30 PM

Wander to the Wayside said…
I love this story! I do the same thing with my 6 year old grandson - we just get in the car and take off with no destination in mind, no plan except to find critters and cool stuff. No tv or computers, no sibling rivalry! Sometimes we're silly, sometimes we have serious talks, but it's always interesting and special.

Trina said…
What a great day! And the pictures are great! What cute llamas, alpacas, and ducks. :)

It's fun to take off with no destination because you never know what you might find just past the next bend. We'll take roads we've never taken before JUST BECAUSE we've never been down that road before. Even though we no longer have our Harley, we still live by the motto "It's not the destination. It's the journey."